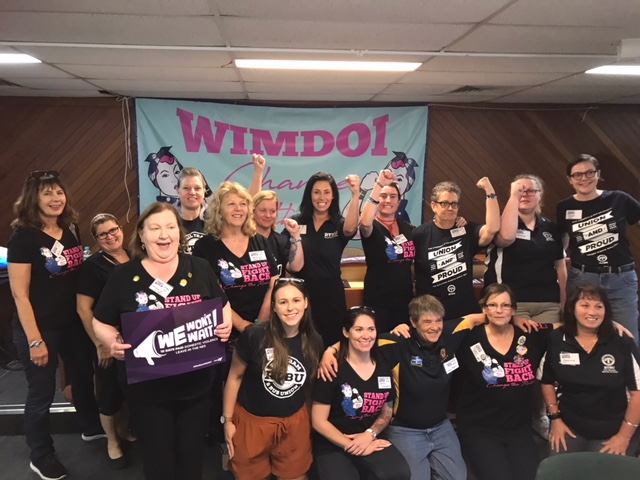 120 Union Women joined together for the Conference (including a massive contingent of 16 RTBU Women representing every Branch and the National Office, our biggest Delegation ever).

Women in male-dominated Unions were also well represented (including our own).

Guest speakers included Luba Grigorovitch, Sally McManus, Ged Kearney, Ros McLennan, Jodie Evans and Lisa Heap. As well as the original Organisers of WIMDOI, Lorraine Usher, Jane Calvert, Patricia Fernandez, Max Adam (absent), Michelle Ingley-Smith and Diana Sully, from some thirty years ago. It was wonderful to hear their stories and the absolute battles they had in setting up WIMDOI. We certainly appreciate all the hard work that has gone before us to make WIMDOI the powerhouse that it is today.

Campaigns such “We Won’t Wait” and “1800 Respect” were on the Agenda, as were seminars about Superannuation, Gendered Violence, Mentoring Young Women, Indigenous Women in FNWA, Building Power and Training and Skills.

WIMDOI Women held a rally with Sally McManus and Ros McLennan leading the charge through the streets and malls of Brisbane. Chants of “It’ll be Grim Under Tim” and (the best by far) “One, Two, Three and a bit ... Pauline Hanson’s full of shit” were screamed with much gusto. It was a very powerful rally to be part of and Union Women made themselves very much heard.

Overall it was the best WIMDOI yet, and I commend the RTBU National Office and Branches for ensuring that RTBU Women were well represented. In nearly all the pictures that the QCU put on their Facebook profile, an RTBU flag was in sight.

We now have two years until the next WIMDOI ... plenty of time to beat our record of 16 RTBU Women in attendance ... challenge accepted!