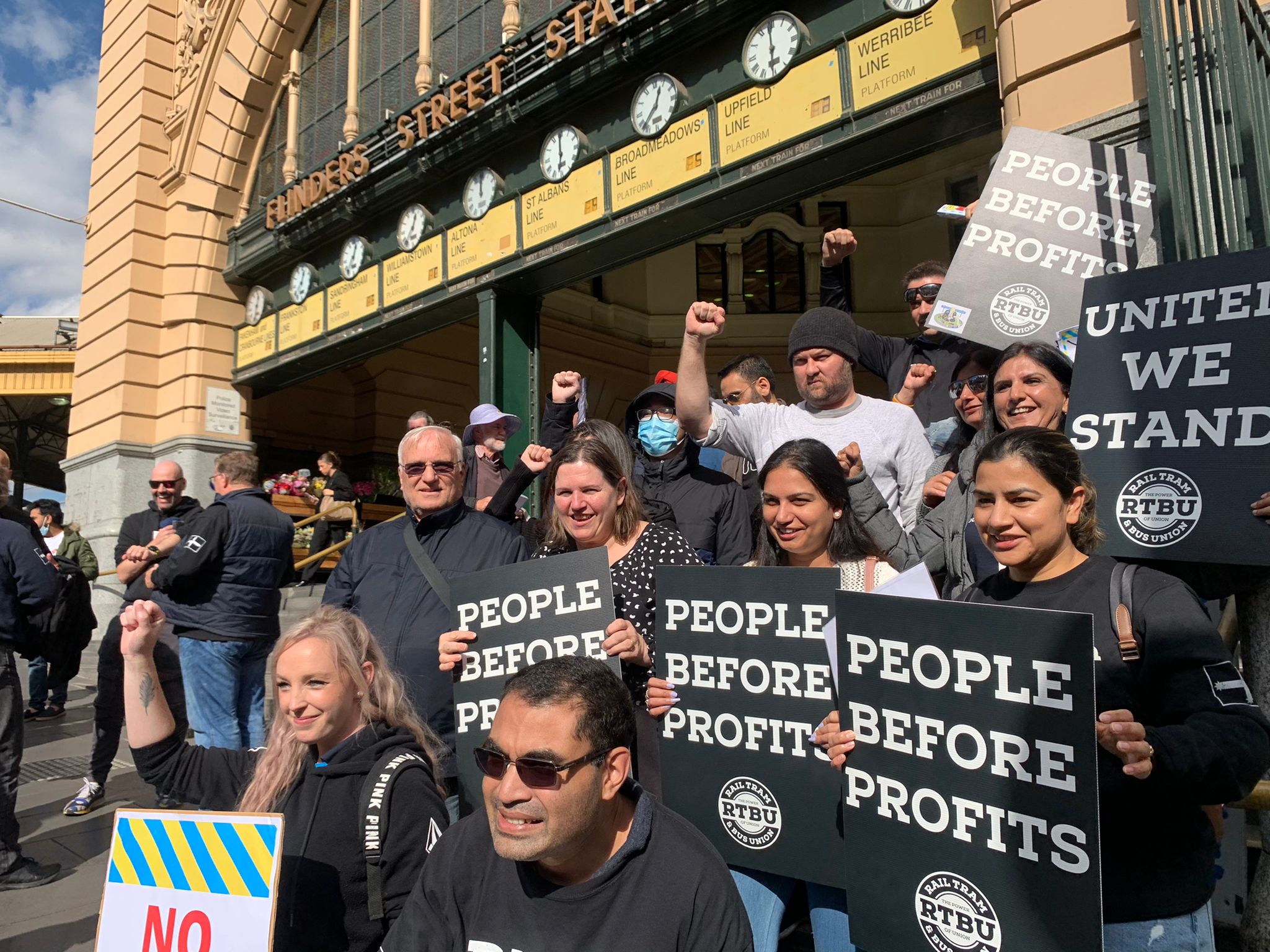 In April, Metro Trains said all Passenger Service Leader positions would be abolished along with a significant number of Station Master positions, leaving many workers devastated.

The RTBU condemned the cuts, which undercut management’s so-called “One team One Metro approach”.

As well as the cuts ,there was also an attempt by management to reclassify some Station Master roles and move others to different stations.

The EBA requires Metro to work with the RTBU to undertake a joint review of roles, responsibilities and classification structure for station grades.

Instead, in breach of the EBA, Metro had done this aggressive review without consulting the RTBU.

“Every member regardless of grade was affected by this as they saw the dreadful impact it had on their workmates facing an uncertain future due to the actions of Metro management,” Victorian Branch Secretary Luba Grigorovitch said.

The following day an emergency meeting of RTBU station delegates unanimously resolved to oppose the cuts, support any member in management’s firing line, and stand united in opposing the injustice of the Metro cutbacks.

“Metro lied through their teeth claiming frontline workers wouldn’t be affected,” Luba said. “But these redundancies will affect the frontline, full stop.”

RTBU members kicked off a “NO WAY METRO!” campaign against the station cutbacks.

Protests were held around the city with members making their case and enlisting wider support, with “We are Essential Workers”, “No Job Cuts”, and “I am not OK” banners proudly on display.

“Despite the distress their plans were causing our members, Metro refused to stop its restructure, so the RTBU had no choice but to seek an urgent Federal Court order to stop it,” Organiser Vik Sharma said.

“Instead of taking part in a joint staff review, Metro unilaterally conducted a review which they tried to implement by attacking PSLs and SMs. This was despite receiving tens of millions of dollars in taxpayer money to stay afloat during the coronavirus pandemic.”

In a big win for members, Metro subsequently agreed at the Federal Court hearing to halt redeployments and redundancies until the dispute was resolved in the Fair Work Commission.

The RTBU also advised members to hold off on participating in the Metro’s expression of interest redundancy scheme until the dispute ran its course in the FWC.

In Commission conciliation with Metro management, both parties agreed:

THE FIGHT GOES ON

Vik said good gains have been made, but there is some way to go.

“The Passenger Service Leader situation is sorted,” he says. “Of the 10 PSLs, four took voluntary redundancy and they are happy, and the other six have been offered jobs within the company. All were comparable jobs or a step up.”

Vik said the Station Masters’ situation also has moved closer to resolution. Their forced redundancy issue has been resolved, but job redeployment must still be negotiated.

The RTBU has since negotiated job redeployments for affected members leaving only a handful outstanding that are still being worked through.

Weekly bulletins and regular online meetings as well as on-the job visits, posters and campaign actions have seen to strong success and formidable results for union members through direct action and the protections of a strong EBA that has laid the groundwork to uphold job security.

In the face of brazen attacks from management that have tried every trick in the book, members have stood firm and virtually stopped Metro’s savage efforts in their tracks.

While we can’t be sure of what Metro might try next, the RTBU will continue pushing until this matter is fully resolved and use any further avenues at its disposal to fight on.