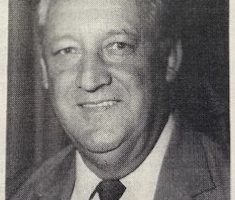 He was a full time official as President of both Unions from 1977 until his retirement in 1995.

Ron was instrumental in the amalgamation of the AFULE, ARU, ATMOEA and NURWA in 1993. He became the inaugural National President of the Public Transport Union (PTU), which subsequently changed its name to the Rail, Tram and Bus Union (RTBU). He was also a stabilising force within the early years of the PTU/RTBU.

Ron guided the AFULE and the RTBU, through good times and bad, earning the respect and admiration of members, fellow unionists, politicians, Industrial Commissioners, and opponents.

He also earned the respect and friendship of representatives from international organisations.

Ron was a team player, a mentor, teacher and friend to his many comrades in the union movement.

A titan of our Union, Ron Bradford will be dearly missed, but his legacy will live on.