It’s 4am on a warm spring morning and NSW Trains managers are anxiously pacing up and down platforms in Newcastle, Lithgow and Wollongong, their workforce out on the grass. 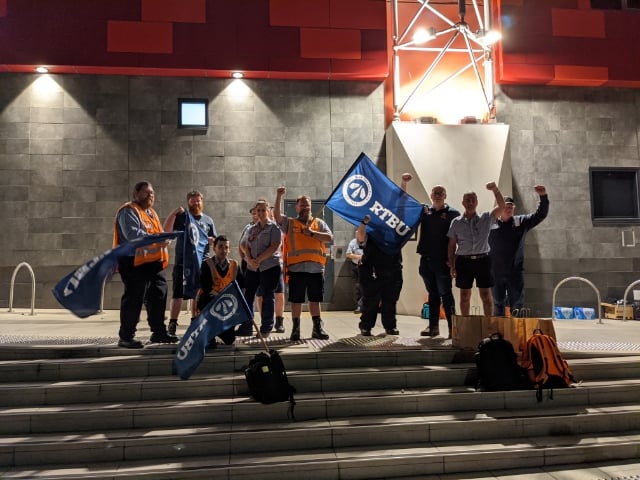 It’s only four hours into a strike members have been forced to take due to serious safety issues with the Berejiklian Government’s New Intercity Fleet (NIF).

The government had ignored members’ concerns and decided to press ahead with its ‘Mission Readiness’ test run of its South Korean built trains on Friday November 27. Now the government finds itself without the drivers and guards to staff the trains.

By 4.30am it’s all over. The government backs down and ‘Mission Readiness’ is cancelled. Strong, determined action by workers has won the day.

“It’s really disappointing that we reached this point, and railworkers had to stand up as the last line of defence in protecting the community,” said NSW Branch Secretary Alex Claassens.

“The design of this train risks commuters falling through the gaps between the train and platform, resulting in injury or death.

“The current operating system for these new trains is unsafe because it doesn’t allow train guards to properly monitor people in the moments before the train departs.

“In this new train the CCTV won’t pick up that someone has fallen down into the gap.

“Currently, guards can hear people yelling and keep their eyes on the platform and doors until the train pulls away - they won’t under the new model.

“The people on the ground - the train guards, drivers and station staff - know these trains aren’t safe.”

Members in NSW had been calling for a halt to the ‘Mission Readiness’ test since November 20 after an Independent Safety Evaluation of the New Intercity Fleet by Klaus Clemens Engineers found serious safety concerns.

According to the report:

“NIF project does not identify all material hazards and fails to assess them to the degree necessary, hence the NIF operating model is not safe So Far As Is Reasonably Practical (SFAIRP). Particular concerns are raised with the CCTV view being obstructed by the open saloon door, shortcomings with the CCTV technology and the lack of monitoring of the platform gap.”

“This independent report confirms the long-held concern of the union and rail workers that the NIF is a safety disaster waiting to happen,” said Alex Claassens.

“I wrote to the Premier a full week before the ‘Mission Readiness’ test informing her of the report.”

Government officials relied on their own report which found no safety concerns - however their report was written without its author setting foot on a train or even being in Australia due to COVID-19 restrictions.

Many members are concerned the government commissioned the $3.9 billion problem plagued trains in an attempt to reduce the role of the train guard to almost nothing, so guards can eventually be removed from trains altogether.

The 520 South Korean carriages have since cost taxpayers an extra $1.1 billion after it was found they didn’t fit tunnels, stations or tracks in the Blue Mountains.

The trains were commissioned overseas despite local manufacturers in Wollongong and Newcastle bidding for the work. A study by economist Dr Jim Stanford from the Centre for Future Work found if the government had built locally the project would have supported 5,000 direct jobs, and 2,000 indirect jobs.

It would have also pumped $455 million into government coffers in the form of taxes.

The Berejiklian government has spent a total of $15.2 billion on overseas-built rolling stock, including $8.3 billion on 22 6-car sets of metro trains from India, $2.1 billion on 60 light rail trams from France and Spain and a cool $900 million on 17 more Waratah series train sets from China.