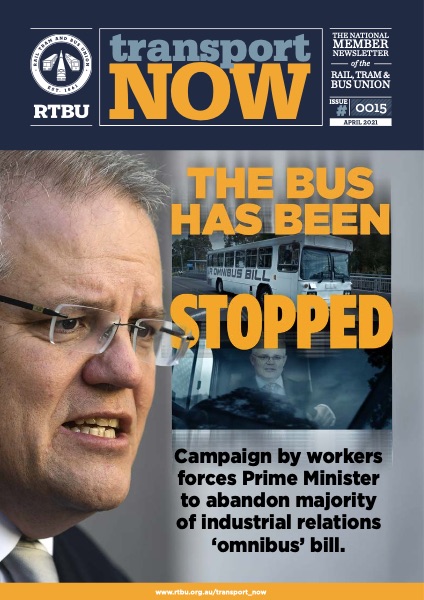 Scott Morrison’s so-called Industrial Relations Omnibus bill has fallen apart, after five of the six elements of the bill were rejected by the Senate.

Follow that train of thought. There’s more to say after R U OK?

Most of us spend a lot of time worrying about our physical health, but sadly we often tend to neglect our personal mental health.

Bardo steps off the footplate after a lifetime of advocacy

After 40 years as a unionist, Allan ‘Bardo’ Barden is hanging up his boots and moving on to the next chapter of his life.

The RTBU’s Keep Freight on Aussie Trains campaign moved up a gear during March, with a group of Workplace Delegates from across the country meeting with Federal politicians in Canberra.

The Victorian Branch has vowed to ramp up its campaign for better disability access to Melbourne trams if funding for essential changes is not forthcoming in this year’s Victorian state budget.

NSW: Union puts unsafe train plan back in the siding

NSW rail workers have chalked up a major victory in their fight over inadequate staffing and major safety issues of the Berejiklian Government's trouble-plagued New Intercity Fleet (NIF) trains.

The newly re-elected McGowan Government in Western Australia is pushing ahead with plans to reopen up to 300km of Tier 3 rail lines and to expand Perth’s passenger rail network.

An accident involving an Aurizon freight train and truck near Kalgoorlie in February has highlighted concerns over the need to get freight back on the tracks in Western Australia.

The Queensland Tram & Bus Division has been distributing ‘Activist Kits’ specifically tailored to the needs of Brisbane’s female bus drivers.

TAS: State Government late for the bus on overcrowding

Two’s company, 40’s a crowd, but the numbers hoping to ride Tasmania’s buses are far more than that.

SA: Privatisation fight will go all the way to the South Australian election

The RTBU has vowed fight the South Australian Government’s continued privatisation push all the way to next year’s March state election.