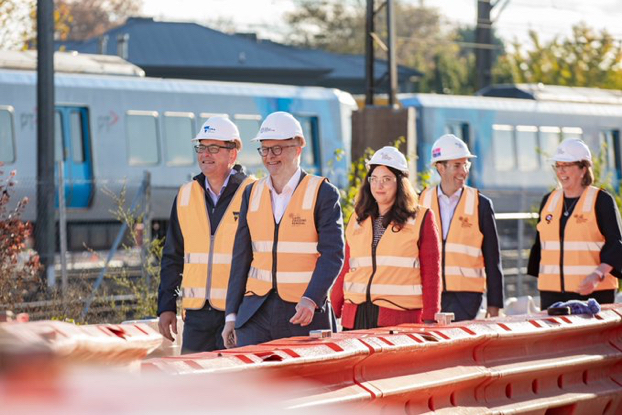 “Families in the outer suburbs of our major cities are being held hostage to the petrol pump. Public transport projects like this provide people with access to affordable and convenient transport options, so they don’t need to buy a second or third car.

‘By investing in urban public transit, governments can minimise transport-related carbon emissions, reduce traffic congestion, and tackle the cost of living all at the same time.

“The Suburban Rail Loop is a huge win for Victorians. We now call on the State and Federal Government to ensure that the rail loop is fully staffed so that it can be a long-term win for good, secure jobs as well.”

Mark Diamond said Federal Labor’s $2.1 billion investment is a much-need commuter project which stands in stark contrast to the mysterious $1 billion upgrade to the rail corridor between Sydney and Newcastle.

“Scott Morrison found a lazy billion for a project that no-one has ever heard of, no-one has called for, and will not bring any benefits to travellers.

“The Prime Minister called this a ‘faster rail’ project, but it will make little if any difference to travel times between Sydney and Newcastle.

“The only apparent benefit of Morrison’s project seems to be political, in that it involves spending a billion dollars in a marginal seat.

“It is clear that Anthony Albanese gets transport, and understands how investment in transport infrastructure underpins productivity and growth.

“But Scott Morrison just sees transport infrastructure as another opportunity for rorts and pork barrelling.”

Mark Diamond said the RTBU was asking all candidates in the Federal election to sign a pledge showing their support for faster, safer, better passenger and freight transport networks.

Voters would be able to see which candidates supported better transport by checking in to the campaign web page – www rtbu.org.au/fastlane - over the course of the election campaign.

I pledge to support measures that lead to faster, safer and better passenger and freight transport networks across Australia, including:
• Building more trains, trams and buses in Australia;
• Increasing Federal investment in public transport to provide Australians with better access to services and reduce our reliance on expensive imported petrol;
• Developing a long-term plan to grow jobs in the rail freight sector
• Better integration of rail, road, sea and air transport; and
• Ensuring people doing the same job have the same pay and same standards of workplace safety