The RTBU has cleaned up at the recent Queensland Council of Unions’ Labour Day Dinner Awards. 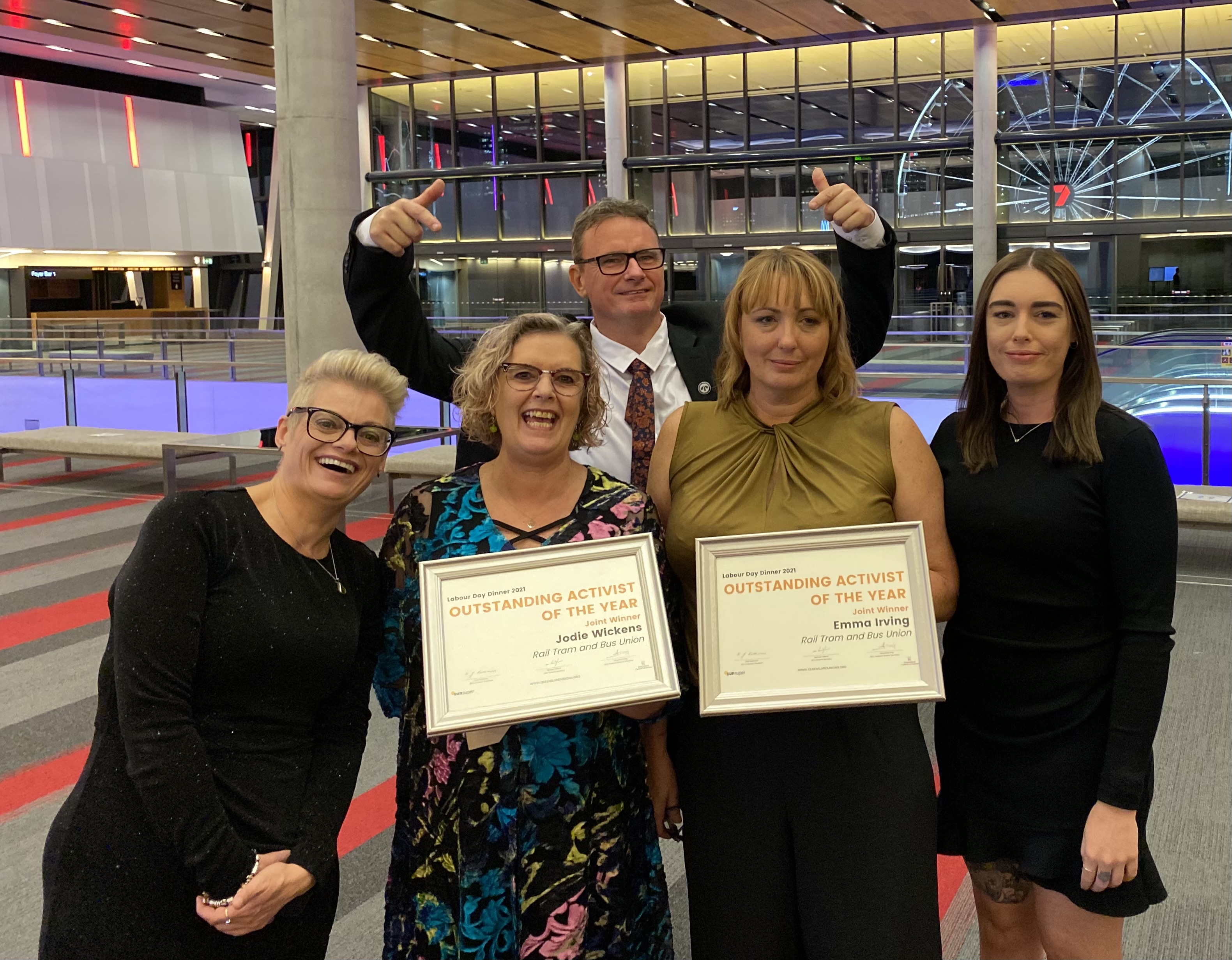 The Queensland Branch picked up six awards in total.

The judges saluted with highly commended awards in four categories:

But perhaps the biggest wins were by Rockhampton delegates Emma Irvine and Jodie Wickens, joint winners for Outstanding Activist of the Year.

Jodie and Emma are train controllers working for Aurizon, and together represent about 50 RTBU members.

Jodie says the award came as a surprise, and was not for a particular campaign or action but for their overall achievements.

“It’s because we are amazing!” Jodie says with a laugh. “But I guess we just listened to our members and did what was right for them.

“There was no specific reason for the award, but we were put forward because we have won the only 10 disputes we’ve had - so we are 10 out 10!

“The last one involved changes to national drug and alcohol standards.

“Aurizon didn’t consult on that. They had to, even though it was national standards, but we sorted that out within about 24 hours.”

TELLING 'EM WHERE TO GO! 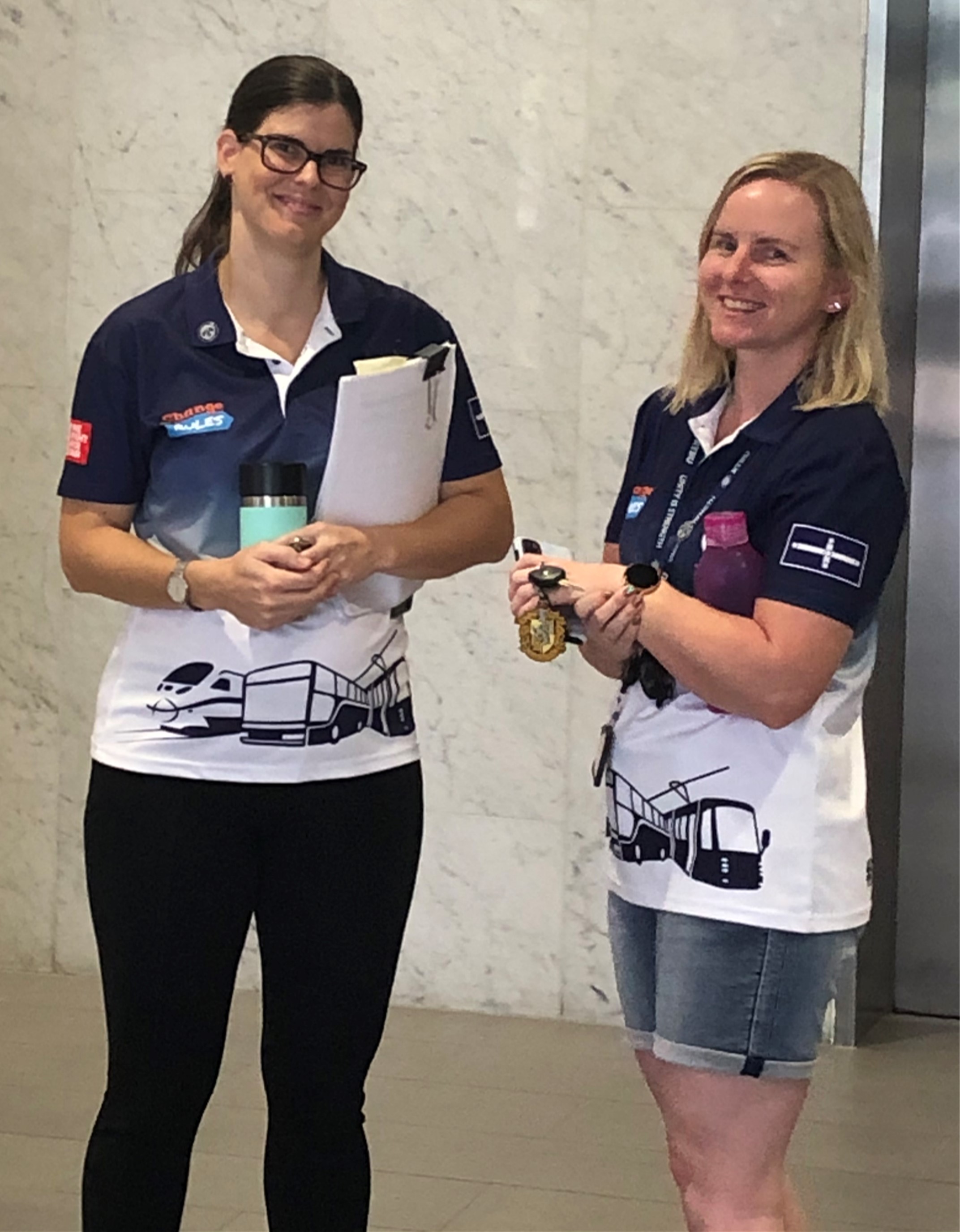 Jodie and Emma set routes for the Aurizon’s regional mining trains. “We tell them where to go, but in a nice way,” Jodie says.

She says the Rockhampton RTBU members are “amazing and really supportive”, and help the duo in their battles.

Jodie volunteered to be a delegate when she and other members were on strike during an enterprise bargaining negotiation.

“I have been pulled to unions since I started here, and when we were going through that I thought ‘how do I do more, I want to do more’,” she says.

A delegate was stepping down. The women had joined Aurizon at the same time, went through control school together, and now both wanted to nominate.

“I didn’t know Emma was interested, and when it came out that she was I thought, ‘Am I going to have to fight her for it, because she’ll win!’,” Jodie says laughing.

“But it turned out they needed two, so we became delegates together and we have been unstoppable since!”

THE MEMBERS ARE OUR MATES

Emma Irvine was also surprised when the awards were announced. She had other things on her mind: her baby Darcie Shayne was just a few weeks old at the time.

“Award, what award? Then the text messages started!”=

Up until taking maternity leave Emma, like Jodie, had worked eight years at Aurizon, three as a delegate, and she agrees that they are “amazing” together.

“That’s exactly right! But seriously, while I am sure there were lots of excellent award candidates, Aurizon is an interesting employer, and as much as I love what we do there have been lots of challenges, and we have had the chance to showcase what we can do.”

Emma also became a delegate during the EBA dispute.

“I could see how unfair it all was and instead of just saying ‘someone should do something’, I thought it was time to stand up and be that person,” Emma said.

Working together works well: “It’s great having two of us. If one is busy, or needs to take a break, the other one can take the helm.

“And the RTBU members are brilliant, the members are our mates. But when someone needs to air their grievances with you it can be a bit much if you don’t have someone else to help you.”

Being a delegate is very rewarding, but can be hard work: “You have to be giving of yourself; you have to be able to listen to people even if you don’t agree,” Emma says.

“You have to be willing to work with the employer too, you can’t just be gung-ho or you’d never achieve anything.”

Emma says being a female delegate has not been a problem: “I think the employer deals better with women. They tend to be a little less aggressive, and perhaps listen to you more.

“I don’t think anyone would have it any other way now. Everyone wants more females in the workforce, we get the job done and make the workplace more fun!”