If Turnbull fails on rail, States should form their own Infrastructure Bank

The upcoming Federal Budget is Malcolm Turnbull’s last chance to gain any credibility on rail and public transport – but if he fails to deliver, the States and Territories should go it alone and set up their own infrastructure bank to fund new rail projects. 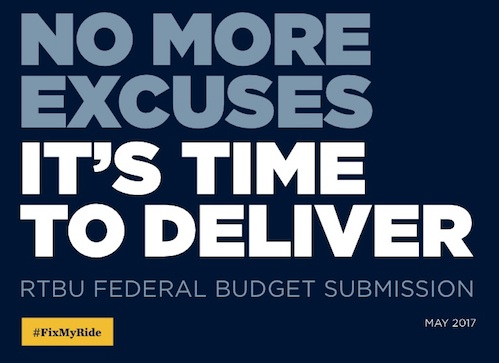 Rail, Tram and Bus Union (RTBU) National Secretary Bob Nanva today said the crippling of cost of urban congestion had become such a drain on the national economy that States could no longer wait for the Federal Government to show leadership.

“Australians are sick and tired of this Government’s rail-phobic approach to transport, and its chronic failure to deliver on major infrastructure projects.

“If this year’s Federal Budget doesn’t go big on rail investment, then it will be time for the States to join forces and look for other ways of funding new projects.”

The RTBU Federal Budget Submission recommends the establishment of a $30 billion Australian Commuter Trust to fund rail and public transport projects, under the control of the Federal Government.

Mr Nanva said an alternative option could be for State and Territory governments to band together to form their own fund, with start-up capital from state-issued government bonds or from industry super funds.

“The Australian Commuter Trust would be a dedicated investment fund focussing on public transport in order to drive a new era of efficiency and productivity growth in our major cities.

“It would bust the economic cost of transport congestion, and address housing affordability by opening up new opportunities for medium and high density housing along transport corridors.

“And by driving the use of value capture funding methods, it would generate a return and become self-sustaining over time.”

Time for Mal to stump up

Mr Nanva said the pressure was now on Malcolm Turnbull to put his money where mouth is on rail and public transport.

“The time for talk is over, it’s now time to deliver.”