The Albanese Government has delivered on a key election promise, after the Senate last night passed laws to ensure all workers have access to a minimum of ten days paid family and domestic violence leave. 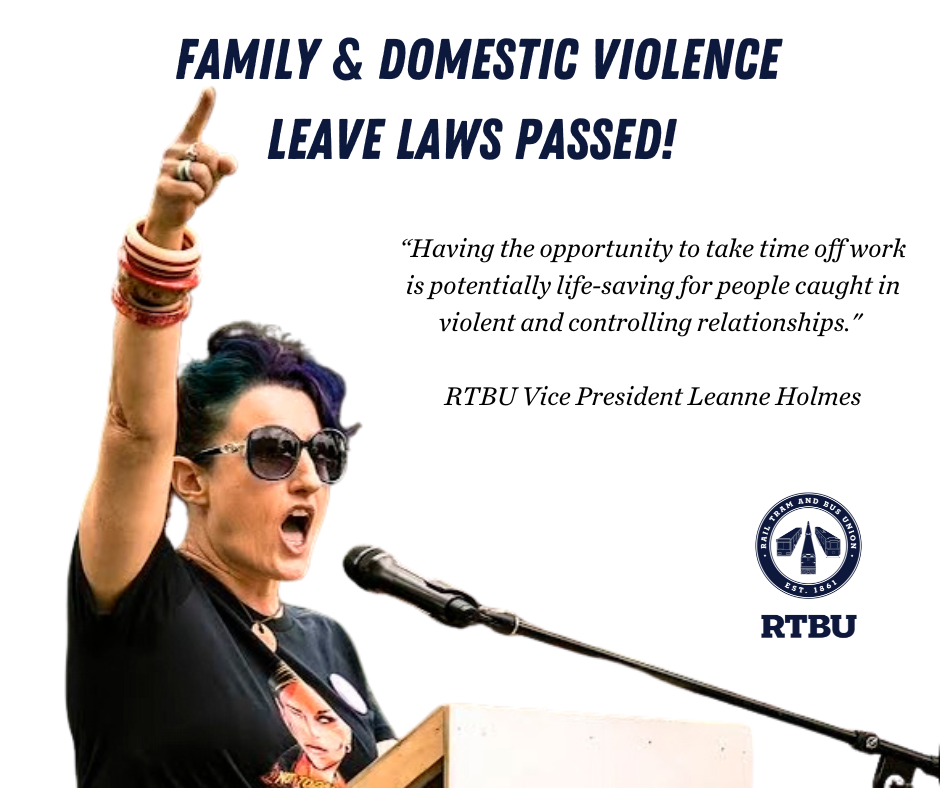 Rail, Tram and Bus Union (RTBU) National Vice President Leanne Holmes said the passage of the legislation was a landmark day in the campaign to end violence against women.

“We know that having the opportunity to take paid time off work is potentially life-saving for people caught in violent and controlling relationships,” Ms Holmes said.

“Victims of domestic violence need time: time to find a place to live, time to see a doctor, time to set up new bank accounts and establish financial independence, time to enrol children in new schools, time to get counselling and professional support, and so on.

“For victims who are also trying to hold down a job, that could be time they just don’t have.”

Ms Holmes said the RTBU made a submission to the Senate Education and Employment Legislation Committee supporting the draft laws.

“The RTBU argued that all full-time, part-time and casual workers should have access to paid Family and Domestic Violence Leave, and payment for leave must be at actual rates of pay - not base rates.

“Furthermore, entitlement to paid Family and Domestic Violence Leave must be available from commencement of employment, not progressively accrued.

“We thank Senators for supporting our recommendations and supporting victims of family and domestic violence.”

Ms Holmes said the RTBU has already negotiated Family and Domestic Violence Leave into many Enterprise Agreements around Australia.

“We know from experience that Family and Domestic Violence Leave works for both employees and employers.

“Access to this form of leave not only means that victims can remain in meaningful employment, it also means that businesses can retain qualified and skilled workers.”