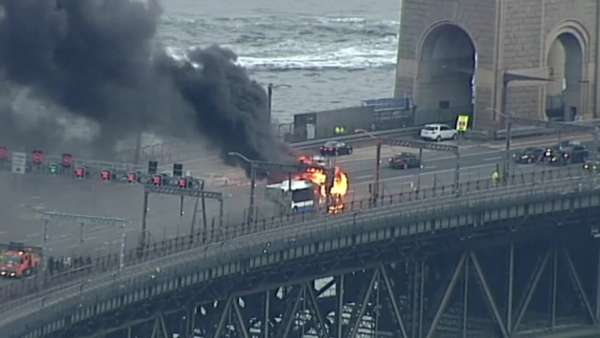 The dramatic scenes brought the evening peak hour commute to a halt, causing mass delays for thousands of workers trying to leave the city.

Passengers flooded onto the bridge amongst passing traffic to escape the fire, putting lives at risk.

“The RTBU has been calling for this problem to be fixed for years, and the public deserves answers as to why the government is still sitting on their hands as buses burn,” Mr Preston said.

“Andrew Constance knows about this problem, this is not a new issue, and the government needs to get serious and retro-fit all buses with fire suppressant systems to ensure that passengers and drivers are safe.

“It is beyond belief that we are still seeing our public buses catching on fire on our roads putting passengers, drivers, pedestrians and other road users at enormous risk.”

Too little, too late

“Todays incident highlights that we need action now, not when the government gets around to it,” Mr Preston said.

“It is too dangerous to have buses on the road that don’t have these simple fire suppression mechanisms installed. Passengers and drivers can’t wait any longer.”

STA buses are expected to have fire safety systems installed by the end of this year, while private providers have until the end of 2018.

Mr Preston is calling for Premier Mike Baird to sack the Transport Minister, saying his inaction is putting lives at risk with another major incident possible at any time.

“The Minister needs to take responsibility for this latest bungle that saw two passengers on the state bus network taken to hospital because of his inaction on installing fire suppression systems,” Mr Preston said.

“It is time for the Premier to realise this saga has been going on for years and his Minister is just not taking it seriously. Mike Baird needs to ask for Andrew Constance’s resignation.”