Turnbull turns his back on Cross River Rail 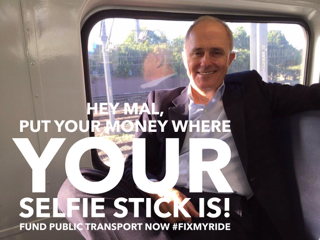 In response to questions about whether he would invest in Cross River Rail, the single most important public transport project in Australia, Prime Minister Turnbull’s only commitment was to “read the business case”.

When asked whether he’d seen the business case, Mr Turnbull said he wasn’t even aware it had been completed.

“Malcolm Turnbull has given Queenslanders the clear impression that he’s trying to crab-walk away from supporting Cross River Rail.

“The Prime Minister seems more interested in taking photos of himself trains than actually funding public transport. It just shows how out of touch he really is.

“I welcome Bill Shorten and Labor’s commitment to fund Cross River Rail on the basis that agreement is reached with Queensland Government, but find it appalling that Mr Tunbull appears so disinterested.

“Add this to Mr Turnbull’s woeful underfunding of the M1 and you have to wonder if he has any idea what it’s like for Queenslanders trying to deal with congested roads and crowded trains on a daily basis.

Mr Doogan said the RTBU has been running the #FixMyRide campaign, asking Mr Turnbull to put down his selfie stick and fix public transport by supporting critical infrastructure projects.

“All the experts agree that without Cross River Rail, Brisbane will grind to a halt in coming years. Rail will hit capacity and congestion on roads will just get worse as a result.

“Weasel words aren’t good enough.  If Mr Turnbull is serious about public transport then he should commit to supporting Cross River Rail.”