RTBU National Secretary Bob Nanva said the Turnbull Government's legislation would have led to the loss of around 300 direct jobs in the rail freight sector, on top of 1,200 in the Australian maritime industry.

“Malcolm Turnbull likes taking pictures of himself on trains, but this appalling bill would have taken interstate containerised freight straight off trains and onto foreign flag of convenience vessels.

“It has been absolutely disgusting to watch Coalition politicians like Senator Richard Colbeck openly boasting about the fact this job-killing bill would have taken work from Australian land transport operators.

"The Coalition hasn't changed its spots.  It might have new leader, but it still hates Australian workers.

“Thankfully the Turnbull Government’s attack on rail jobs was rejected in the Senate by the ALP, the Greens and Senate cross-benchers including Jacqui Lambie, Ricky Muir, Glenn Lazarus, John Madigan and Ricky Muir.” 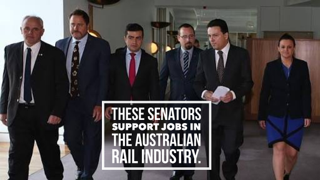 Bob Nanva said voters in regional areas should remember who stood up for local jobs, and which politicians were prepared to sell regional communities down the river.

“The Senators who voted against the bill should be congratulated for putting Australian jobs first.

“The Liberals and the Nationals, however, have nailed their colours to the mast.  They would rather send Australian jobs off-shore than support Australian land and maritime transport industries.”

For more background see the RTBU's submission to the Senate on this issue.