THE clichéd catch-cries of Australia’s Industrial Relations war are well-known by now.

Conservatives and business leaders decry the behaviour of so-called “union thugs”.  They complain that unions are making Australia “uncompetitive”, and tell workers to swallow some bitter medicine before we all perish in the looming economic “headwinds” and “stormclouds”.

Meanwhile unionists – such a myself - complain about constant attacks on workers rights, and the need to stand up to the evil Tories and their agenda of hate.

I should know. I’ve done than my fair share of ranting and I’m sure to be doing more of it in the future.

But the truth is that Australia’s Industrial Relations war is not only a complete waste of time, it’s dragging down the economy and poisoning our body politic.

It contributes nothing to our community.

The latest development in the IR war, however, will do nothing to help the situation.  The Trade Union Royal Commission seems intent on ramping up the conflict, and taking the acrimony and bitterness to an entirely new level.

In the process, it could be setting a legal precedent that will have profound and frightening implications for everyone involved in enterprise negotiations.

That’s because this week the Trade Union Royal Commission, in conjunction with the Australian Federal Police, took the unprecedented step of charging two elected union officials with a criminal offence for advocating uncompromisingly for the safety of their members. 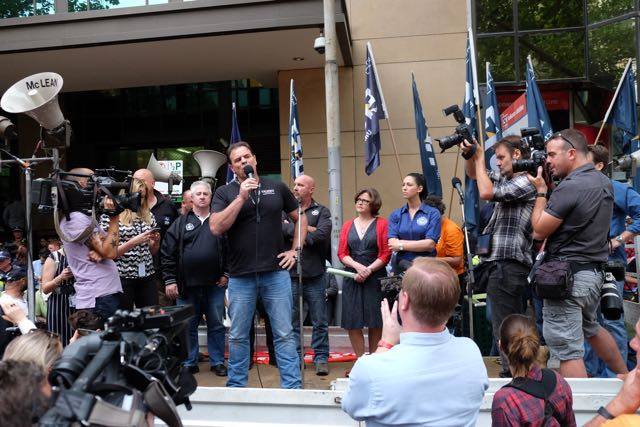 The AFP and Royal Commission's actions are all the more odious in a year where, on average, more than three people a week have been killed at work.

It’s hard to tell where the Royal Commission is coming from.  When investigating the AWU, it says compromising is selling out workera.  But when it comes to the CFMEU, it says militancy is a criminal offence.

The only consistency in the Royal Commission’s approach is that unions are always wrong – no matter what approach they take.

To reinterpret the issuing of an industrial demand as blackmail is the start of a very, very slippery slope.  But if the TURC – and the Federal Government – really wants to go down this path, then it must at least be consistent in the way it applies the new rules of the game.

What, objectively speaking, is the difference between John Setka and Shaun Reardon’s conduct, and the behaviour of Alan Joyce and Qantas, when Qantas shut down its global operations and left passengers around the world stranded in an attempt to pressure unions into accepting his restructuring program?

Or what about the behaviour of Lance Hockridge and Aurizon when, earlier this year, Aurizon threatened to abolish 12 enterprise agreements and throw around 5,000 workers onto the award safety net unless unions accepted their demands? Or when Aurizon carried out its threat, and forced workers to negotiate with a metaphorical gun to their heads?

So called threats and industrial thuggery are by no means exclusive to unions.

As much as I detest their strong-arm tactics, I’m not suggesting that Lance Hockridge and Alan Joyce be charged as criminals.  Because frankly, the continuing escalation of IR brinkmanship is becoming an exercise in Mutually Assured Destruction.

Right now it seems a long way away, but some of us still dream of a model of collaborative workplace relations, where employers seek to engage and empower workers to be part of the decision-making process.

The first step is to put down the zealotry and ideology and to replace it with a dose of pragmatism.  The industrial relations warlords – including the zealots in charge of the TURC - need to put down their weapons.

It’s time for many people to take a cold shower, step back and think of the national interest.