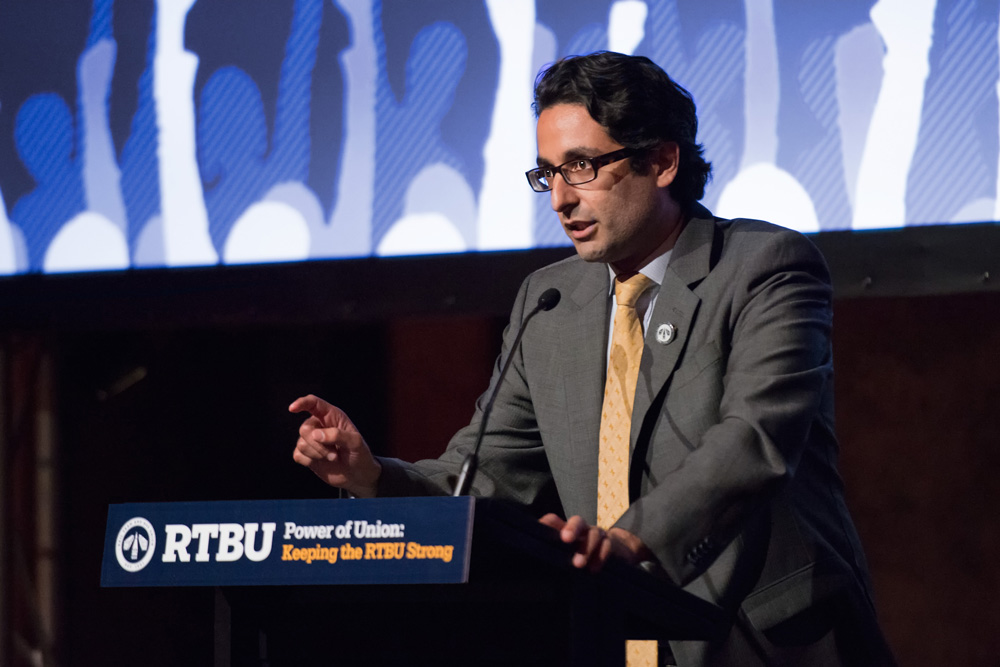 Good evening comrades one and all.

I’d like to start this evening with an ‘observation’ and a 'thank you'.

My observation is that despite the best efforts of his entire adult life, his entire professional career, Prime Minister Abbott is gone.

United Voice, the AMWU, CPSU,ETU, ASU, AMOU, Police Association and Firefighters Union - all still here, and all with us this evening. It means a lot to the RTBU that you’re here to share this occasion with us.

Some of the best friendships are forged in the trenches.

So, in a year where the smear has stained the national political fabric, it comes as no surprise that we’ve become great mates.

And friends who’d have thought Tony Abbott would now complain of being unfairly dismissed.  Oh, Tony, if only you were a member of one of the Trade Unions I just mentioned, you may well still be in the job.

We are learning fast that the new boss, just like the old boss, has arrogantly started to attack working conditions like penalty rates and successful industry superannuation funds.

But friends, this new battle will be even tougher because Malcolm Turnbull is smarter, more accomplished, and more ruthless than the man he replaced.

So it’s not a case of ‘the king is dead long live the king,’ but rather ‘the budgie is dead and the ego has landed'.

To my ‘thank you’. My thank you goes to the Commissioner of the Trade Union Royal Commission, Justice Heydon.

Because friends, this Commission also exposes another truth, an even deeper truth. It exposes the Liberals as by far the ‘lesser’, by far the ‘trickier and meaner’ of the two major political parties.

And I evidence this proposition with a question: have we ever seen a Labor Government running a Royal Commission into ‘Big Business?’

And casually nominating a handful of big businesses and CEOs to target with federal police; with subpoenas; with phone taps and coercive powers and no rights to silence; all in full public view.

Chauffeuring every disgruntled union boss to court to condemn an employer they despise.

Flippantly nominating a handful of companies as enemies of the state and setting the public watchdogs on them.

I sense some here tonight may think - hang on a minute, that’s not a bad idea - because the conduct of some of these companies warrants this thought.

Labor has never done it - but, perhaps, this is an idea whose time has finally come.

Perhaps we need to shine a torch into the chronic and systemic underpayment of vulnerable workers such as those at 7-11.

Into the chronic and systemic use of sham contracting and phoenixing in the building sector.

We do not want an end to business in the way that they want an end to unions, we just want fairness for those who can’t fend for themselves, for good companies that do the right thing.

We believe the market is a tool for growth. The Liberals believe it is a wheel pushed by servants for the benefit of the master.

We believe in a society served by an economy. They believe in the opposite.

And right now, driven by this ‘robin hood in reverse’ dogma, they again want: our rights at work, our superannuation, our penalty rates.  They want us to work harder - for longer - and for less.

They want a world where insecure and marginal workers are at the mercy of others who give them their contracts – or dole out the work.

A world of non-unionised, exploited, workforces bursting at the seams with the anxious; the stressed; the people without weekends; without evenings, Christmas or Easter with the family.

The labour movement and our union has been fighting for over a hundred and fifty years for these rights and conditions. And, despite the Tories’ best efforts to obliterate us, we are still standing - still swinging - to ensure these things are not easily handed over.

What the new Prime Minister - and his Treasurer Scott Morrison - don’t understand is that a Union is a collection of people who believe - and that their centuries old playbook of fear, smear and legal manipulation can never extinguish the fire of a true believer.

And tonight we are joined by one of the truest believers, a very special man.

A man I pay tribute to on behalf of the RTBU.

I speak of Tommy Jones, who after 45 years of service to the RTBU as a member and delegate, has recently retired from working on the Tasmanian railways.

A man who, when Tasrail was privatised, refused on pure principle to sign an individual contract.

Bare in mind the entire workforce was made redundant and reemployed on individual contracts - but this man, on principle, would not have it.

He would not be bullied, coaxed or cajoled into signing an AWA.

His conviction cost him thousands.

There is a personal price someone pays for this sort of leadership, for this sort of belief - the stress and the uncertainty of standing one’s ground and saying ‘I believe in my rights and those of working people, and I’m taking a stand.’

He assiduously unionised the workforce in spite of the challenges - and the result to his immense credit - was a decent and fair EBA for himself and his colleagues.

Friends this is a man who won the day. One man - not an MP, not a public servant but a trade unionist who believed.

I’m told tonight is his first time out of Tasmania in over 30 years. Could I ask Tasmania’s own Tom Jones to be upstanding so we can toast an RTBU hero, legend, true believer and the real face of trade unionism in Australia.

So, as Dyson Heydon pours over thousands of pages of toxic transcripts he would do well to remember these stories.

Nevertheless, Turnbull and Heydon should understand this: when Tories start fights with Unions - we have people like Tommy to finish them off.

People like Ashley Waddell, Nick Lewocki, Trevor Dobbyn and Paul Collins - our other life members here with us this evening.

Tonight, Tom is an addition to the ranks of RTBU Life Members - our Hall of Fame. This is a celebration.

There will, however, also be a damnation, because I also want to induct a particular company into another Hall: the Hall of Shame.

There are many such companies., many of them, all buoyed by the Liberals, but tonight a special induction is made to a company called Aurizon.

Because the Aurizon experience is a constantly bad one.

The most obvious is when they cried poor to the Fair Work Commission and Federal Court to terminate 12 enterprise agreements covering 6,000 workers - in order to force them on to inferior award rates and conditions.

Having succeeded in their court case, arguing they were cash strapped and nearly broken - just a matter of months later they would announce a half year profit of a mere $300 million to the Australian Stock Exchange.

Like the pharaohs of old, this is a company which punishes hard work when it should be rewarded.

I induct them into the RTBU Hall of Shame. Shame Aurizon shame. Because in the upcoming election year we are fighting to make sure their type of behaviour is not the norm.

We will be fighting for a fair Australia not an Aurizon Australia, where Australians would suffer low pay, no guaranteed hours, no paid holidays, occasional super, exploitation of vulnerable workers, weekend family time sacrificed without compensation, and unfair dismissal.

But to win, the entire Labor movement could learn some lessons from the latest life member of the RTBU: that fights are won by people who believe.

And wars are won by united groups of people who believe for the longest.

And when I speak of unity, I speak of the Labor Party and the Trade Unions standing shoulder to shoulder.

Labor is its best self when it embraces its connection with 2 million trade union members.

Two million men and women who want to believe.

The path to success is in embracing these people, not in running from them.

Friends, no one should doubt the power of our movement. Doubt our beliefs. Or doubt our capacity to persuade others.

We’re going to take it up with gusto, and we’ll see you in the trenches.