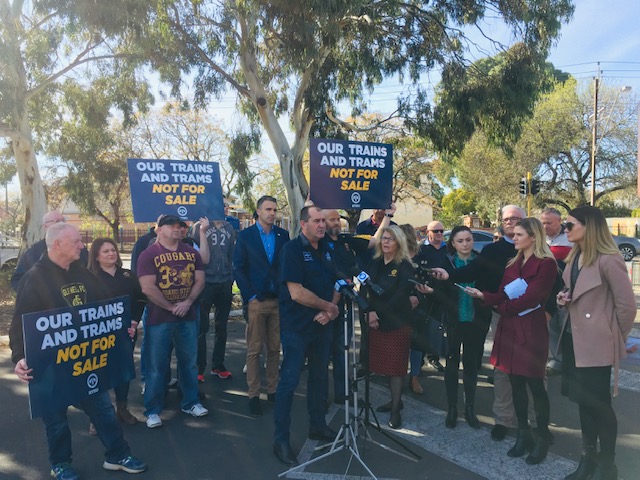 The campaign will involve a public petition, advertising and ongoing actions to highlight the negative impacts of privatising tram and tram services.

Rail, Tram and Bus Union (RTBU) South Australian Secretary Darren Phillips said workers would campaign all the way to the next State election if necessary.

“The Liberals went to the state election telling voters they did not have a privatisation agenda.  What’s more, privatising trains and trams was not part of their policy platform.

“They simply do not have a mandate for their reckless and damaging privatisation plans.”

“The lack of transparency around this decision is absolutely appalling.

“Every dollar of taxpayer subsidy that goes to a private operator is another dollar taken out of the public transport system.

“In Victoria, the privatisation of metropolitan train and tram services has seen $350 million taken out of public transport and put into the pockets of overseas shareholders in just eight years.

“Stephan Knoll has failed to answer a single question about his dodgy privatisation scheme, and has refused to meet with affected workers.

“The State Government cannot continue to hide behind spin and lies.”

“Given that his Transport Minister is hiding under a rock somewhere, it is now up to the Premier to answer if the Government will provide workers with a cast-iron guarantee on jobs wages and conditions, and to explain exactly how much money will be taken out of the system in private profits.”