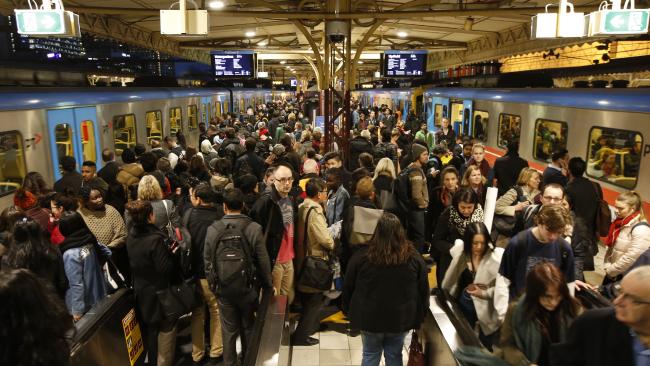 None of us should really be surprised by Melbourne’s rail crisis.

There are upsides, of course, to being stranded on a rail platform. You can catch up with friends on social media, sharpen up your crossword skills, or read the Herald Sun from cover to cover.

But the problem is that most of us really can’t afford to be stranded by a failing public transport system day after day. The regular delays not only affect us personally, but they are costing the Victorian economy millions of dollars.

The Rail, Tram & Bus Union has been doing its best to hold Metro to account, and to pressure the company into lifting its performance. We have exposed systemic failures in the way track maintenance has been managed, and a culture of putting profits above service.

The only thing that Metro has proven to be good at is cutting corners, with chronic understaffing right across the network. Picture: David Caird

While investigations are still under way into the cause of the problems, the Metro meltdown which paralysed the entire network on Thursday, July 13, exposed the fact that our train control system does not have an adequate Plan B when things go wrong.

Metro’s $80 million Disaster Recovery Centre was unable to be activated. What’s more, it was unstaffed, and workers from the main site in the CBD had to somehow travel from across the city just to get in the door.

Meanwhile, questions also remain over the cause of a derailment just days later on the Lilydale line, which again saw services cancelled and commuters stranded.

It was not supposed to be this way.

When Jeff Kennett privatised Victoria’s rail and tram operations, he promised more services and better performance at a much lower cost to the taxpayer.

We would turf out the crusty old Victorians who had been running the system for decades, and replace them with companies from overseas who would bring all their wonderful overseas expertise and cleverness with them.

The new operators would turn the old system into something shiny and new, using their special powers of private sector magic.

Oh the places we would go!

Sadly for Victorians, it hasn’t turned out that way.

The only thing that Metro has proven to be good at it is cutting corners, with chronic understaffing right across the network.

Last year, the head of the Australian Consumer and Competition Commission Rod Sims said the privatisation of public assets was not delivering the promised benefits for the people of Australia. Picture: Josie Hayden

When it comes to under-investing in track maintenance, skipping stations, and failing to recruit, train and deploy adequate numbers of qualified staff to meet basic operational needs, Metro is indeed world-class.

So while Metro is sending fat profits back to its overseas shareholders, commuters are wondering when things are going to improve.

Perhaps it’s time that we, as a state, moved beyond our cultural cringe, and gave ourselves some credit.

Despite what people in Spring St may think, Victorians are not stupid.

We have some extremely talented and highly qualified people right here in Victoria who are eminently capable of running our local train and tram services.

The RTBU has been running a campaign to return our train and tram operations into public hands.

We believe this is the best way to ensure that Victorians get value-for-money from their investment in public transport.

Most importantly, returning these operations back to the people means that control of important decisions is taken out of the hands of foreign companies.

But it’s not just unions who are calling for a rethink of privatisation.

Last year, the head of the Australian Consumer and Competition Commission Rod Sims said the privatisation of public assets was not delivering the promised benefits for the people of Australia.

Other countries are also finding that the shine is wearing off the privatisation agenda.

A recent parliamentary report in the United Kingdom found that rail privatisation had failed to deliver on the key benefits that were initially envisaged.

It’s little wonder that sections of the UK rail network that were handed over to the private sector in the 1990s are now coming back into the public sector.

In fact, last year Transport for London brought a maintenance contract for works on three Tube lines back in-house, saving an estimated $131 million in private-sector management fees over the next decade.

I’m sure that putting Victoria’s train and trams back in public hands seems like climbing a mountain to many of our politicians. But they shouldn’t be so timid. Victorians, more than ever, need their leaders to stand up and show some courage.

As the famous Dr Seuss book also said: “Today is your day! Your mountain is waiting. So ... get on your way!”

Luba Grigorovitch is branch secretary of the Rail, Tram and Bus Union.

This article first appeared in the Herald Sun on Friday 21 July, 2017.