Moving ANZAC Day tribute for railworkers in Hornsby and Petone

One hundred years ago railworkers from Hornsby in NSW, and Petone in New Zealand, exchanged flags and flagpoles as a mark of solidarity and mutual respect for railworkers from both countries who had been killed in WW1.

Memorial services were held in both NSW and New Zealand to mark the 100th anniversary of this historic ANZAC occasion, and NSW Branch Secretary Alex Claassens delivered a speech at Petone on behalf of the RTBU: 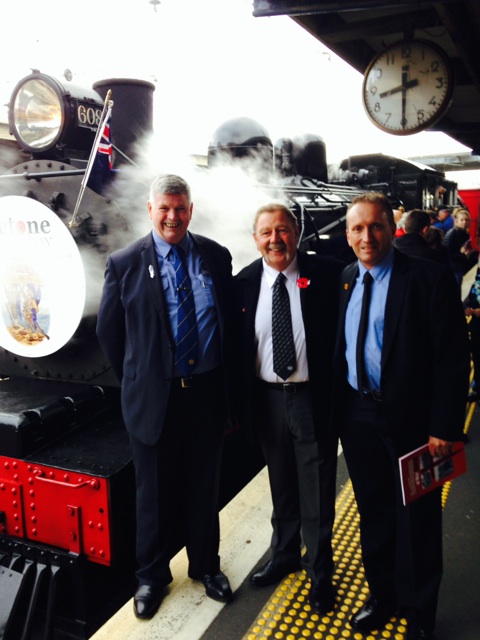 It’s an honour to be here for this historic commemoration today.

Today, one hundred years on, it’s hard for us to comprehend the horror of the first world war.

How life was simply turned upside down.

The Great War took place half a world away, but its impact on Australia and New Zealand was incredibly profound.

The trip from the railways on Australia and New Zealand, to the frontline of battlefields in Europe and the Middle East, was taken by thousands of people – mostly young men, with their lives still in front of them.

People like railway clerks George Downes and Arthur Cook, and Henry Lowe – a porter at Sydney’s Central Station -  who all signed up for the war effort in Sydney in September of 1914.

These three men served at Gallipolli, and other battlefields, and they were among the lucky ones who returned home.

They brought back stories – and pictures - of the reality of war and now the images they took form an important part of our historical record in the Australian National Archives.

Railway workers were also integral to the war effort at home - moving vast numbers of troops, and enormous quantities of supplies.

Of course, many railway workers were not as lucky as Downes, Cook and Lowe.

Here in Petone, for example, ten fine men from the railway workshops went to war, but didn’t come back.

So it is days like today which give us a chance to come together to reflect on the lives lost, and the incredible sacrifice of so many.

To think about the bravery of the people who left to join the war, and the courage of those who were left behind to carry on life without their loved ones.

On ANZAC Day, we gather in places across Australian and New Zealand to remember.

To pay homage, and to pay our respects.

But these days are also a chance for us to appreciate what we have today.

The wonderful communities that our forefathers built for us.

And the values they instilled in us.

For us in the union movement union, we carry forward the values of fairness, of opportunity, of compassion, and of course unity.

Those values guide us and inspire us.

We have a duty to carry forth the baton, to live our lives with the same sense of duty and the same commitment to justice.

Just as we have a duty to learn from the mistakes of the past.

Over the past one hundred years, the bonds between our two countries have only grown tighter.

We enjoy our friendly rivalries on the sporting field, almost as much as Australians enjoy drinking a glass of New Zealand wine.

But on ANZAC Day every year, we stop to reflect on a wonderful, enduring friendship that was forged in blood.

Friends, ANZAC Day is a somber occasion, but it is also a beautiful celebration of solidarity.

Because solidarity between peoples of different countries and cultures is the foundation stone of peace, and the antidote to war.

By standing together, we set an example for the world.

And that’s something worth celebrating.