At first glance, it looks like something pretty significant went down in Canberra last week.  But once you get over the shock and read the fine print, it’s clear that nothing much has really changed.

Transport NOW examines looks at some of the personalities and the policies to see what it all means.

Malcolm Turnbull has emerged from the shadows to take the prize that he was seemingly destined for.  An Oxford Scholar (with no shortage of Oxford Scholars in his personal bank account), Malcolm is the member for the affluent eastern Sydney seat of Wentworth.  A former lawyer for Kerry Packer, he made a mint out of the company OzEmail and was in charge of the failed campaign to make Australia a republic in the 1990s.  He was also the Chairman and Managing Director of merchant back Goldman Sachs Australia.  (Goldman Sachs later become embroiled in controversy after it emerged that its US parent company had made a secret $4 billion profit out of the US sub prime mortgage crisis by effectively betting that its own dodgy financial products would collapse.)

Malcolm had a stint as Opposition Leader from September 2008 to December 2009.   It all went a bit wobbly though when he called on then Prime Minister to resign over allegations that the Prime Minister’s Office had sought favourable treatment for a political donor.  Despite being an email entrepreneur and hot-shot lawyer, Malcolm still failed to see that Exhibit A in his prosecution of Kevin Rudd – an email supposedly from a political adviser to public servant Godwin Grech – was a hoax.  When the Malcolm’s allegations unraveled, so did his credibility, and a few months later he was rolled by Tony Abbott.

But now he’s back as Australia’s 29th Prime Minister.

Scott Morrison is Australia’s new Treasurer.  ScoMo, as he’s known, is a factional enigma, seamlessly moving between the warring tribes of the Liberal Party, convincing everyone that he’s part of their team.  He’s considered the architect of the Coalition’s Stop the Boats policy, and popularized the phrase “that’s an on-water matter so I can’t comment” as a water-tight excuse for not having to answer any questions about anything,

Arthur Sinodinos is back with a vengeance, inside the Cabinet as the new Cabinet Secretary.  It’s seems like only yesterday that he was being hauled before the NSW Independent Commission Against Corruption (ICAC), and forced to answer questions about the huge amounts of money funnelled into the NSW Liberal Party via the company Australian Water Holdings.  Arfur was both the Chairman of Australian Water Holdings AND the Treasurer of the NSW Liberal Party at the time, but apparently he knew nothing about it ...

Mal Brough is another MP back from the wilderness.  After initially losing his seat in the 2007 “Ruddslide” election, Mal got himself into a pickle when he was outed as the secret adviser helping former political staffer James Ashby in his sexual harassment claims against down then-Speaker of the House Peter Slipper.  The case against Peter Slipper was dismissed by the courts, and Brough was heavily criticised by Judge Steven Rares for his role in the affair.  Brough went on to replace Slipper in the seat of Fisher in the 2013 election and now he's our Special Minister of State.

Michaelia Cash takes over as the new Minister for Employment and Minister for Women.  Watch this video.  Enough said.

The new Prime Minister has pledged to stick to the script, and won’t be making wholesale changes to the Coalition’s policy platform – including the controversial trade agreement with China, which will allow Chinese companies to bring in their own imported labour for major projects.  As Malcolm Turnbull said in Parliament last week: 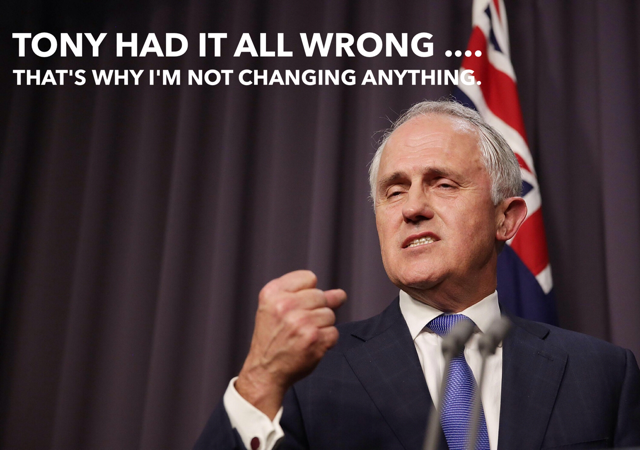 Click here for more about the “differences” between Tony Abbott and Malcolm Turnbull.